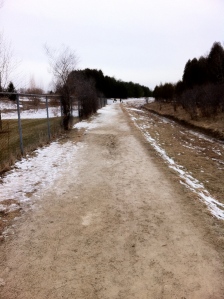 Like Pavlov’s Dog I immediately began to drool when I received the notice for the annual HK5K in my inbox yesterday. Immediately I began to plan my training schedule and start to think about how much work I would need to do and when I would have to make a commitment to doing the work. Then, I had to revisit my promise to myself. I have made an agreement with myself to love myself and treat myself properly. In coneiya, it becomes clear that we cannot punish ourselves, put ourselves down or disrespect ourselves if we are “one”.

Last year was a disaster. I was pumped up to do the run and my daughters had agreed to do it with me and then the world conspired to make sure that I wasn’t ready. I had a two-week bout of unexplainable diarrhea that came and went and left me feeling drained and tired. I never found out what caused it, but I was definitely under the weather. Add in company from out of town, unexpected knee and foot pain and it was a disaster waiting to happen — but I had already said that I would do the run and I was allowing myself to be pulled along by the commitment that I had already made to my daughters.

This year, it will be different. Isn’t that the final war cry of the about to be defeated? I decided that instead of looking externally for a workout schedule, like I did last year, I would develop my own. In my mind, and based on some of the training plans that I used decades ago as a competitive swimmer, I would aim for a 10% increase in distance. This is very easy to calculate when you are on a treadmill because you can actually watch the distance tick off and then stop when you complete the right distance.

So I calculated increments increasing by 10% and put out a schedule of running every other day, except of course, where I already had plans in place. I fleshed out my schedule to four runs a week by adding in smaller runs, where necessary, the day after or before another run. These smaller runs would be one half the length of the previous run so they should be easier.

The schedule was complete and it gave me a full two weeks before the race to determine if I would be capable of running the full 5K before I had to commit to the race. There would be no need, this year, to tell anyone that I was training, until, of course, I was certain that I could do the run. If I never got to the level of running then no one would be the wiser and I would have established a pattern of exercising on the treadmill that would continue – theoretically – into the fall when I have to close the pool and I begin my desperate search for a new form of regular exercise.

So day one, I napped. Now, I know that that seems ridiculous, but I am trying to treat myself like I care about myself. This is in stark contrast to societies messages of “no pain no gain” and the like. I do not think that it is simply your force of will that gets things done. Coneiya teaches us that it is when your mind and your body agree and respect each other that the most lasting progress is made.

Anyone that has ever dieted and lost weight, short term, can attest to the fact that the iron will of your brain sooner or later fails. There is simply no way that most of us can use the army sergeant part of our personalities long term. Self-flagellation, self-criticism and unrealistic expectations ultimately lead to self-hatred, insecurity a sense of failure and loss of hope.

That is not where I wanted my new running schedule to take me. Last year, buoyed on by peer pressure and the belief that I could just put mind over matter, I ran the 5K with my daughters to end up ultimately hurting myself and then doing very little physical activity for several months afterwards. This is not a good thing.

So I napped, felt refreshed and then strapped on my running shoes. I have a sweet set up in my bedroom. The treadmill is off to the side and I can see the television from where I run so I put on Netflix. Did you know that all of the seasons of Star Trek the Next Generation are now on Netflix? True story. If anyone can support me through my run it is Jean Luc Picard. But I digress…

The plan was to run one kilometre. I have run much more than that in the not so distant past so I was not worried. I did the required three-minute warm up and turned up the speed to represent a slow run. This is always a point of contention with me, myself and I. At what speed are you running? If you are doing a slow jog at the speed of a walk, is that considered a run? I chose a speed that was moderate to low based on my personal experience and began.

Nothing went well. The first thing that I noticed is that one kilometre was not only out of reach, but was not even a consideration on the first day. I determined that I could go half a kilometre and then maybe a break and then run the remaining bit in as many pieces as it took. My logical mind was busy doing calculations. I could stay on my “schedule” if I just did the kilometre in pieces. I know from experience that I improve quickly once I am making an effort, so it is just a matter of doing the work.

Wasn’t gonna happen. Not only did I not make it to half a kilometre, it was difficult to make it twenty percent of the way. I struggled to get up to the even number, which is a testament to how foolish I can be. It is just as easy to remember any number, but I insisted with myself that I get to the even number. It took all that I had.

Then I walked. I was still convinced that I could walk until the blood flow regenerated my body and my breathing decreased somewhat and then I could do perhaps another twenty percent. If I did a total of five of those I would’ve run my kilometer even if I had to walk in between. My brain just does not stop doing these calculations.

Wasn’t gonna happen. Well, after a short walk I tried to run again, at a slower speed, (is it actually running? – can’t say) and I only made one tenth of a kilometre. So now what to do, what to do? I walked again. I was exhausted and I was aware that my legs were too weak to push myself too much further. That is the mistake I made last year. Despite knowing that my legs were getting wobbly I continued and hurt my knee — my good knee. I lived to regret that and I was not willing (or capable for that matter) of continuing the exercise.

So, I made a deal with myself. I would finish the kilometre. Yes folks, I managed the kilometre. One kilometre with a combination of sixty percent walking and fourty percent running was all that I completed. The good bits are that I did not hurt myself. Even this morning, the dreaded day after, I am a little stiff but not in pain. I respected myself and I am proud of that. Being a highly competitive person it is difficult to admit to this failure, so publically in my blog, but I’m trying to be honest. I’m sure I’m not the only one that can’t run a kilometre after not running for over ten months.

My new perspective on this is that I’ll continue. If I respect my body signals and do not hurt myself, I will continue to run on the treadmill. Isn’t that better than giving up or having to stop because of injury? Having running as a regular practice is a good thing even if I never run in a 5K for the rest of my life and I haven’t told anyone yet. I’m confident that my daughters don’t read my blog.